ASP.NET Web API is a great piece of technology. Writing Web API is so easy that many developers don’t take the time to structure their applications for great performance.

In this article, I am going to cover 8 techniques for improving ASP.NET Web API performance.

JSON serialization  can affect overall performance of ASP.NET Web API significantly. A year and a half I have switched from JSON.NET serializer on one of my project to ServiceStack.Text .

I have measured around 20% performance improvement on my Web API responses. I highly recommend that you try out this serializer. Here is some latest performance comparison of popular serializers.

UPDATE: It seams that StackOverflow uses what they claims even faster JSON serializer called Jil. View some benchmarks on their GitHub page Jil serializer.

I have used this method on my production project and gain performance benefits.

You can read more about this method in this blog post Manual JSON serialization from DataReader in ASP.NET Web API

3) Use other formats if possible (protocol buffer, message pack)

If you can use other formats like Protocol Buffers or MessagePack in your project instead of JSON do it.

You will get huge performance benefits not only because Protocol Buffers serializer is faster, but because format is smaller than JSON which will result in smaller and faster responses.

Use GZIP or Deflate compression on your ASP.NET Web API.

Compression is an easy and effective way to reduce the size of packages and increase the speed.

This is a must have feature. You can read more about this in my blog post ASP.NET Web API GZip compression ActionFilter with 8 lines of code.

If it makes sense, use output caching on your Web API methods. For example, if a lot of users accessing same response that will change maybe once a day.

If you want to implement manual caching such as caching tokens of users into memory please refer to my blog post Simple way to implement caching in ASP.NET Web API.

6) Use classic ADO.NET if possible

Hand coded ADO.NET is still the fastest way to get data from database. If the performance of Web API is really important for you, don’t use ORMs.

You can see one of the latest performance comparison of popular ORMs. 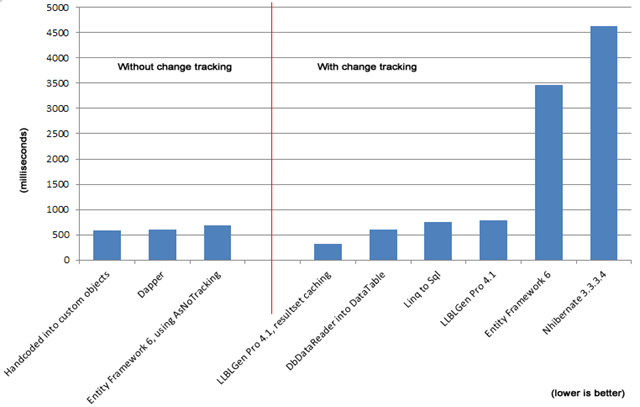 The Dapper and the  hand-written fetch code are very fast, as expected, all ORMs are slower than those three.

LLBLGen with resultset caching is very fast, but it fetches the resultset once and then re-materializes the objects from memory.

Implementation is simple. The operation is simply marked with the async keyword and the return type is changed to Task.

Reduce number of round-trips not only to database but to Web API as well. You should use multiple resultsets functionality whenever is possible.

This means you can extract multiple resultsets from DataReader like in the example bellow:

Return as many objects you can in one Web API response. Try combining objects into one aggregate object like this:

This way you will reduce the number of HTTP requests to your Web API.

Thank you for reading this article.

Leave a comment below and let me know what other methods you have found to improve Web API performance?